Having Hope at Home

Having Hope At Home

Carolyn’s got one evening to make dinner, get married, make peace with her parents, and hide the fact she’s in labour. What could possibly go wrong?

Having Hope at Home is a side-splitting look at a family learning to love again. On a cold winter night, in a drafty farmhouse, a baby is about to arrive. But good intentions dissolve as modern medicine meets midwifery in a torrent of family feuding. As tensions rise between three stubborn generations, so does the laughter. It takes a baby to heal the rift in this hilarious, heart-warming story of forgiveness and hope. A light comedy with serious intentions, Playwright David S. Craig shows us how the human heart sometimes takes the longest way home.

"Let’s cut right to the marrow. Having Hope at Home is a big-hearted comedy that will leave you in tears – tears of compassion and recognition as well as tears of laughter."

"It is a testament to the skill of playwright (David S.) Craig that neither side of this divided family is made entirely ridiculous or definitively right, and there is a protagonist for every side of the debate to be proud of…With Having Hope at Home he has created a truly Canadian blend of wood-stove domesticity, bilingual reconciliation, midwinter mortality, resilience and re-birth…"

“Having Hope at Home is a must see comedy! This is a great example of a perfect play.”

“A delight-filled domestic comedy using heart-felt humour to convey its hopeful message about coping with the challenges of family life."

“This is a very, very funny and deeply touching play.”

"At first blush, Having Hope at Home looks like a hilarious comedy pitting midwifery against modern medicine. However, this is simply the scaffolding that supports what the comedy is really about, which is how a fractured family heals itself through love"

“Everything you could hope for – delightfully funny when it wants to be and dramatic when it has to be. Having Hope at Home disarms you with its sit-com architecture, letting you sit back and enjoy some perfectly constructed comedy.”

“Engagingly written…Craig’s writing is enlivened by an endearing sense of humour and surprises. Just when you think the playwright is going for the ultimate well-made play, he toys with our expectations and takes his work in a different direction.”

“Sweetly comic, wise and wonderful, it’s a journey from anger and estrangement to where the heart reconnects with the joy of what it means to be alive…it is one of the best plays I’ve seen this year.”

". . . a big-hearted comedy that will leave you in tears — tears of compassion and recognition as well as tears of joy...Having Hope at Home will have you shedding tears of laughter one minute and tears of empathy the next. Just when it veers toward sentimentality, the production steers back toward heart-felt poignancy."

Having Hope at Home premiered at the Blyth Festival in Blyth, ON in 2003 under the production and direction of Eric Coates.

Having Hope At Home has seen three German productions at the Theatre Chambinzky Wurzburg in 2007, The Theatre Fur Niedersachsen Hildesheim Hannover in 2009, and Massbach, Frankisches Theatre in 2011.

In the summer of 2012, the 10th anniversary of the premiere was celebrated with a production at the Blyth Festival. 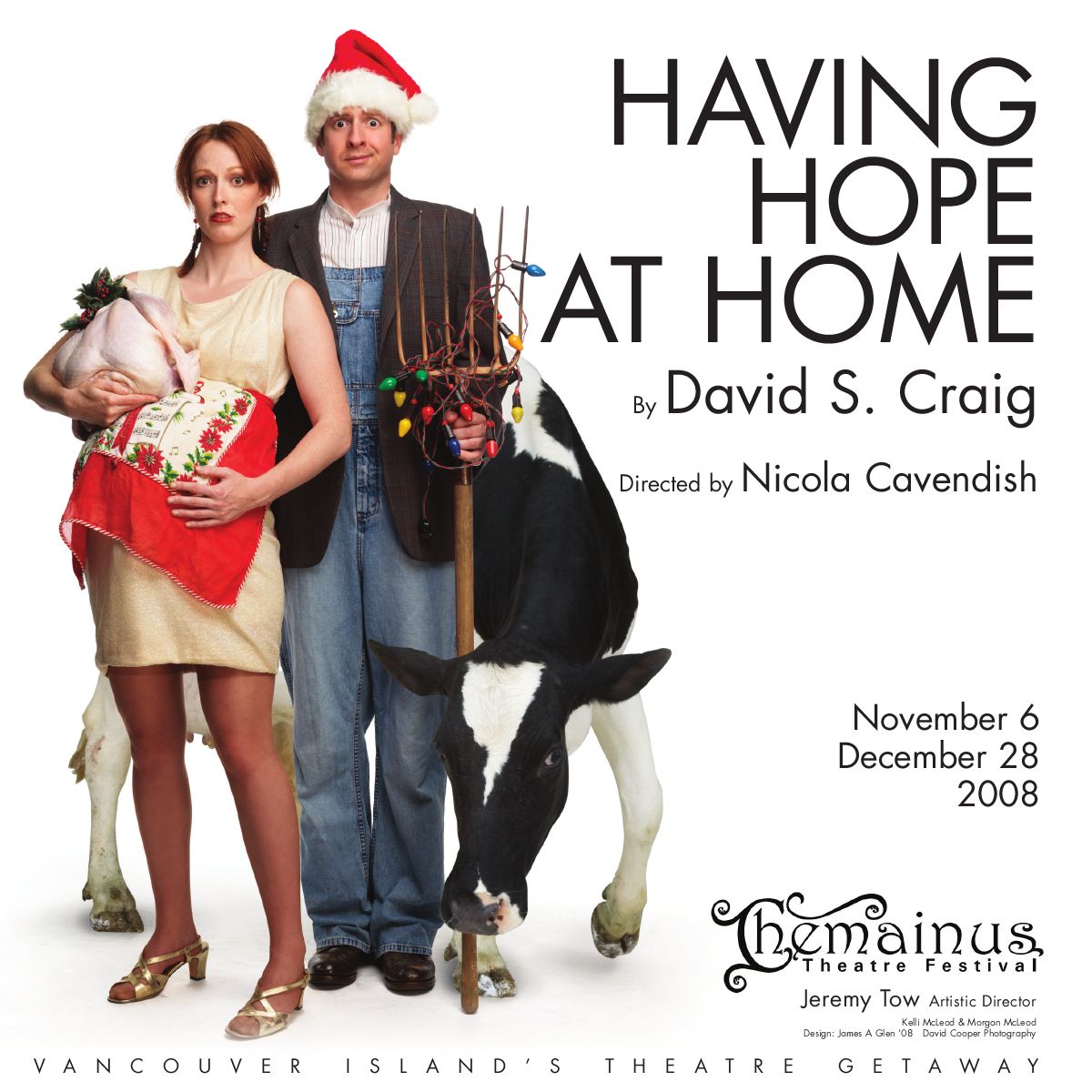