A fiercely funny satire of a land of rotten potatoes and shattered dreams.

A lonely Canadian man named David reluctantly travels to a village in Belarus irradiated by the 1986 explosion at the Chernobyl nuclear power plant to hand over an inheritance to a distant relative as stipulated in his father’s will. Unemployed at home, he still shows up in Eastern Europe with plenty of U.S. dollars only to find out the heir is dead, thus the inheritance reverts to David.

David is squeezed for every buck by an old farmer, Yuri, and a depressed mechanic, Katrina, while his Belarussian cousin, Natasha, starts to angle for wealth through marriage, plus easy immigration to David’s less toxic homeland.

'My Chernobyl' is one of the standout shows of the season. Your best bet for smart, cynical theatre, 'My Chernobyl' gets a glowing recommendation.

If Gogol had been Canadian, he might have written something like 'My Chernobyl'. I'm still smiling. This is one smart and funny script...You never know which way Bushkowsky is going to go: serious, political, or comedic.

'My Chernobyl' is a splendidly original work...(it) repeatedly surprised me into laughter - and challenged me to think seriously about why I had laughed.

My Chernobyl was first co-produced by the Gateway Theatre, Richmond B.C. and the Belfry Theatre, Victoria B.C., in March 2008.

My Chernobyl was published by Playwrights Canada Press, 2009 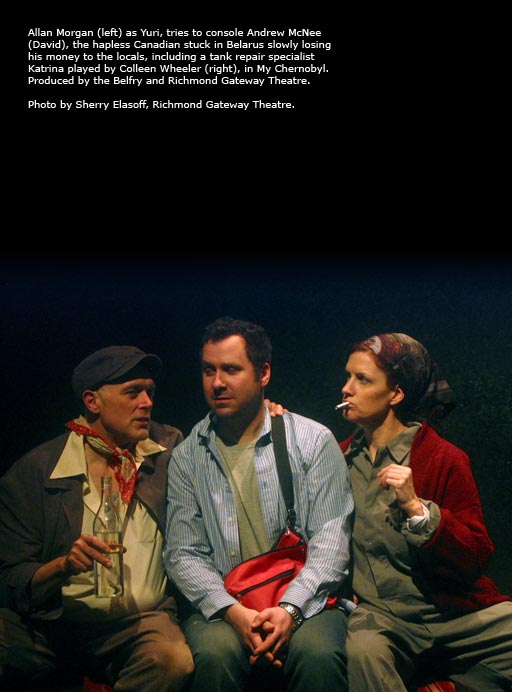