Two buddies, theatre artists and long-time friends Marcus and James, sit at a table and pass the time together playing a made-up game in which they name people, places, or things – Pamela Anderson, microwave ovens, their fathers, Goldman Sachs – and debate whether they are successful or not; in other words, whether they are winners or losers. Each friend seeks to defeat the other, and because one of these men grew up economically privileged, and the other did not, the competition very quickly adds up.

This international hit showcases the work of two giants of the Vancouver theatre scene. James Long’s Theatre Replacement develops work specific to particular places and the people who live in them. Marcus Youssef’s Neworld Theatre investigates questions of power, culture, and belonging.

Their first collaborative work is a staged conversation that embraces the ruthless logic of capitalism, and tests its impact on our closest personal relationships as well as our most intimate experiences of self.

The sly, utterly successful production … scores because of the ambiguities it cultivates. It’s a game and it’s not a game. It’s a play but it’s not a play. Jamie and Marcus are themselves, but they are acting. Sections are improvised every night, but Winners and Losers is fundamentally a scripted drama. All of these tensions get smoothed over because Long and Youssef speak with such ease – uptalking with conversational quirks – that it’s easy to forget we’re watching a show, not a spontaneous dialogue . . . The play makes us question how we form judgments based on nationality, education, and other backgrounds – demonstrating how thoroughly they divide us. What starts as a sly and often funny game of differences ends up as a nuanced and unsettling show. Definitely a winner.

Tour de force . . . As the crowd was leaving the theatre after the performance of Winners and Losers, one man kept repeating ‘Formidable!’ to his companion. This captures to perfection the hour and a half of verbal fireworks we had just witnessed . . . The men’s virtuoso wordplay is a delight . . . at its heart it examines the issues of competition and, by extension, capitalism, the engines that drive modern Western civilization. The structure is centred on two friends having a lively debate while drinking a bottle of beer. But, this being Long and Youssef, some words are said that cut to the quick, and the audience is sent reeling . . . Winners and Losers is heady stuff. Formidable, indeed.

The chatty, semi-improvised piece . . . cross-fades into something more wounding, as Long and Youssef stack up their achievements, parenting skills, bank statements, and class privilege, in a sly theatrical microcosm of how people (particularly men reaching middle age) compete.

Winners and Losers succeeds in its immediate aim, to entertain and provide satirical commentary on the cave-man quality of the winner/loser mindset. It’s when the show upshifts into personal territory — Youssef and Long literally rate each other on the win-lose scale — that the play surpasses itself. Terrible truths are dragged into the scalding spotlight, something that rarely happens in polite society. The effect is devastating and strangely invigorating. One leaves the theatre feeling entertained, exhilarated, psychologically flagellated — and, perhaps, ready to examine our own lives in the uncompromising manner we’ve just witnessed . . . close to a perfect evening.

Insidiously working its way into their casual interplay is the kind of jostling for one-upmanship, for alpha male status, that spritzes the theater with the scent of testosterone . . . we sense roiling currents of envy beneath the friendly banter . . . the financial disparity between them is real, and money very much matters in the real, offstage world.

Winners and Losers is a winner once it starts to think big. … An ethical high ground is at stake. … the personal becomes intensely political. … victimhood rears its ugly head and the finally resonant competition has you leaning in by its pitch-perfect, heavy ending. … What gets in your head are the spot-on depictions, large and small, of people abusing candor and bending the rules in an inescapable race to come out on top.

One of the most exciting, intelligent – and entertaining – shows you’ll see this season . . . . Youssef and Long keep finding fresh ways to enrich their debate: they do short, snappy rounds of categorization; they tell extended stories; they let words fall away. Despite the air of improvisation, the evening is, in many ways, beautifully structured . . . Throughout, there’s also a teasing tension. How much of Winners and Losers is scripted and how much are the performers winging it? I asked Youssef about this after the show and he answered me straightforwardly, but I’m not going to tell you what he said because I want you to have the fun of teetering along that tightrope yourself.

The idea that every show will be somewhat different is a definite hook, but the unflinching and unrelenting discussion of central themes of critical self-awareness, class consciousness and the value of competitive relationships makes this novel piece of meta-theatre a must-see.

One of the most innovative, interesting, and brutal theatre pieces I’ve ever seen. Winners and Losers looks a lot like open-heart surgery . . . the experience for the audience is exhilarating.

Winners & Losers provides pleasure and unease … Exploration of the psyches of two very different men teases viewers with insights into themselves … at the heart of the show is the central question of how to be an artist, a man, a father — how to be a person, really — when you are smart enough to recognize your extraordinary privilege but self-aware enough to still feel the pain of your history. … it isn’t always clear which parts are improvised and which are scripted. That tension gives the evening a terrific sense of immediacy and danger. … a funny, fierce, unsettling theatrical experience that refuses to let you go after you’ve left the theatre.

85-90 minutes with no intermission 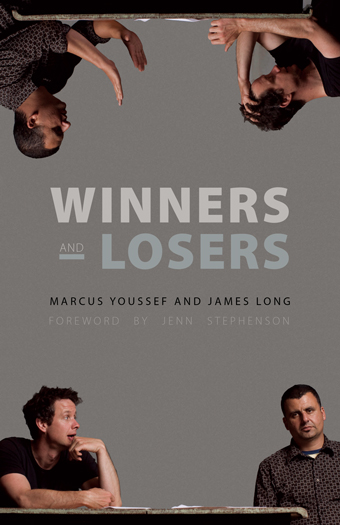 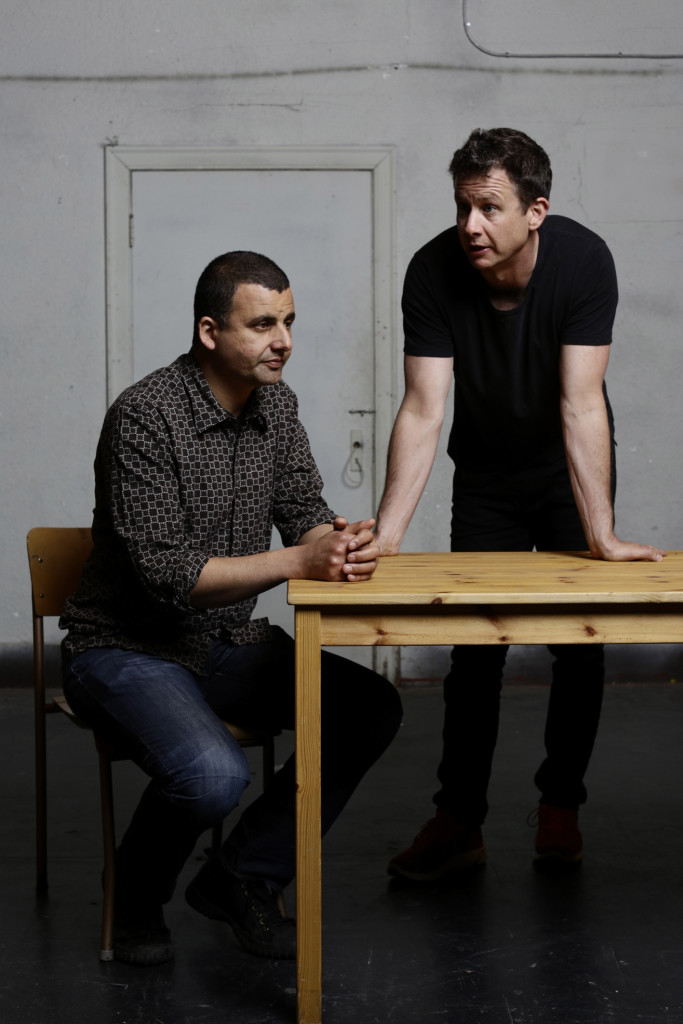 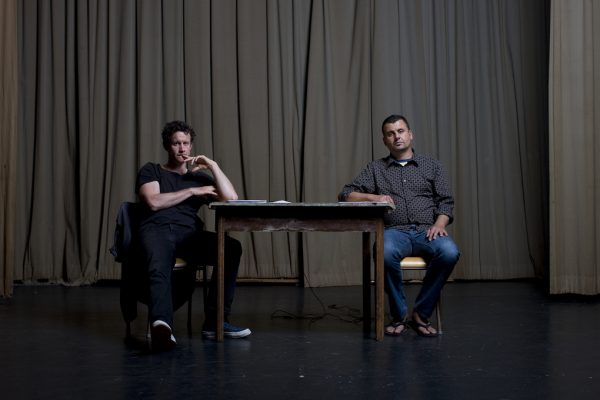 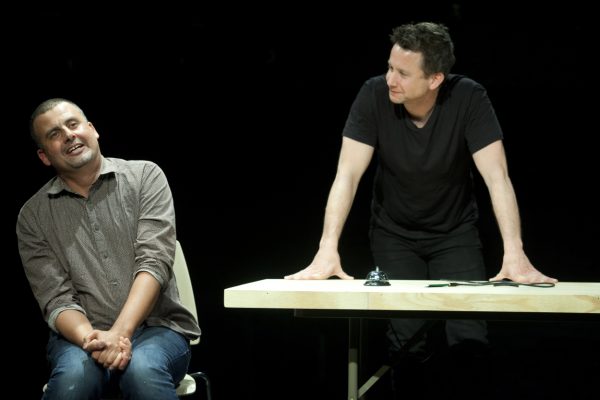 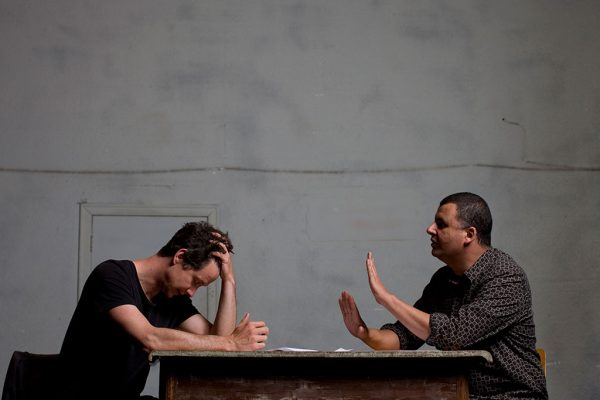 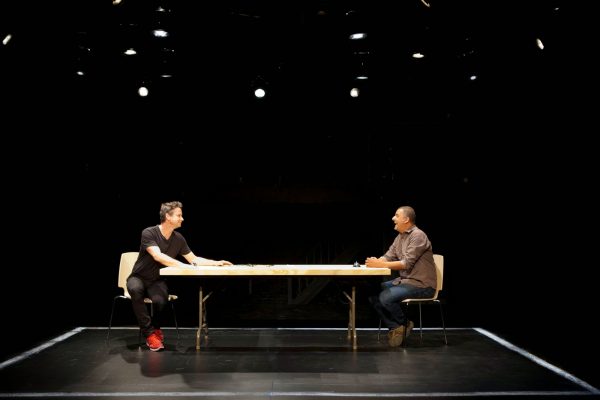