In this elaborate agitprop theatrical collaboration, the internal contradictions and duplicitous double-speak of the “war on terror” are exposed as the propaganda vehicles for the neo-colonialism of the West that they are. “Ali Hakim” and “Ali Ababwa,” refugees from the imaginary country “Agraba,” attempt to seduce their audience into providing them with food, refuge, security, freedom and the material benefits of Western consumer society, failing miserably at every step.

A hard-hitting presentation of a play-within-a-play assaults the audience as Youssef, Verdecchia and Chai do Shakespeare, Shaw and Swift one better with an endless string of buffooneries and absurdities derived from an inversion of the clichés defining the geo-politics of the Middle East at the beginning of the 21st century.

Informed by the research of Paul Krugman and Noam Chomsky, sent up by the post-modern cultural relativism of “Jean Paul Jacques Beauderrièredada,” this political satire is not for the faint of heart.

...must be the funniest exposition of American foreign policy ever devised. But it isn't just funny. It is also troubling and poignant... It has unique qualities: shockingly poignant, seriously funny, humbly powerful, intelligently goofy and skillful in a klutzy way.

★★★★ (Critic's Pick) Need a reminder of how smart, relevant and entertaining live theatre can be? Then check out Ali & Ali.

The best Canadian political play of the 21st century, and the funniest.

What makes 'Ali and Ali' different from, say, Saturday Night Live, is that it places the stateless, exiled condition of 'Ali and Ali' as the root of their actions and cause of their acerbic world-view.

Anyone with the smarts to see through the mass of mendacity that passes for fact these days will appreciate this clever, cutting cabaret.

Chai and Youssef are wily, charming performers who know how to work an audience and one another. I was in their pockets from the moment one of them told me a rude story about a leprechaun.

The gratingly sincere conventions of politically correct drama are laid bare and, through transgression, the right to uncontrolled speech is asserted. This goes beyond clever; it’s hilarious.

Ali & Ali is brilliant clown satire, veering from the absolutely ridiculous to sudden crashes of anger and sadness … We are all implicated, the whole world, one way or another, and Chai and Youssef take no prisoners.

Marcus Youssef and Camyar Chai along with John Murphy were engaging, and hilariously, butt-clenchingly on the money with their observations on what it is to be human in these troubling times.

The audacious Canadian show 'The Adventures of Ali and Ali and the aXes of Evil' from Vancouver BC’s feisty Neworld Theatre makes most U.S. political satire of the 'war on terror' and its many manifestations seem utterly anemic. I’d defend Ali and Ali to the mat for taking full advantage of the democratic freedom to lampoon. It’s a crazy world out there, which needs its court jesters.

In the course of (Ali and Ali)’s well paced hour and a half, Ali and Ali ultimately bring democracy and freedom to the audience, in more ways that one. This is some phenomenally funny theatre.

With the cheekiness of This Hour Has 22 Minutes, this Neworld Theatre/Cahoots Theatre Projects production strikes out in every direction – all at once. 'Ali and Ali' is like being caught in a rain of bullets. Blasting away in all directions at the speed of sound, Youssef and Chai maintain an assault that would make Bush’s boys in Iraq proud. It’s relentlessly creative, hardly giving the audience time to think or even a chance to breathe. 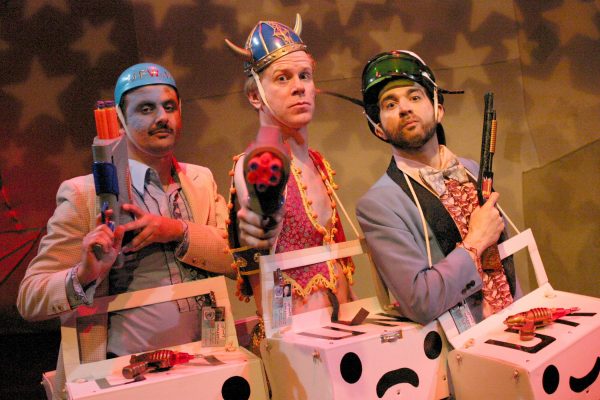 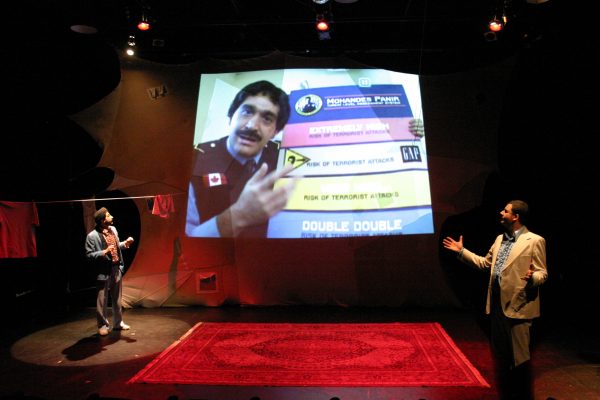 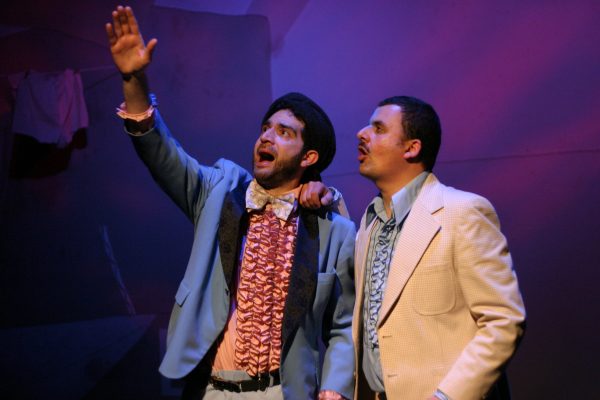 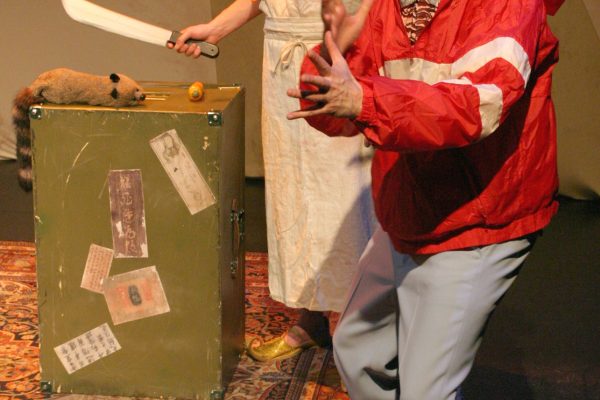 February 2004 – Premiered at the Cultch (Vancouver, BC)