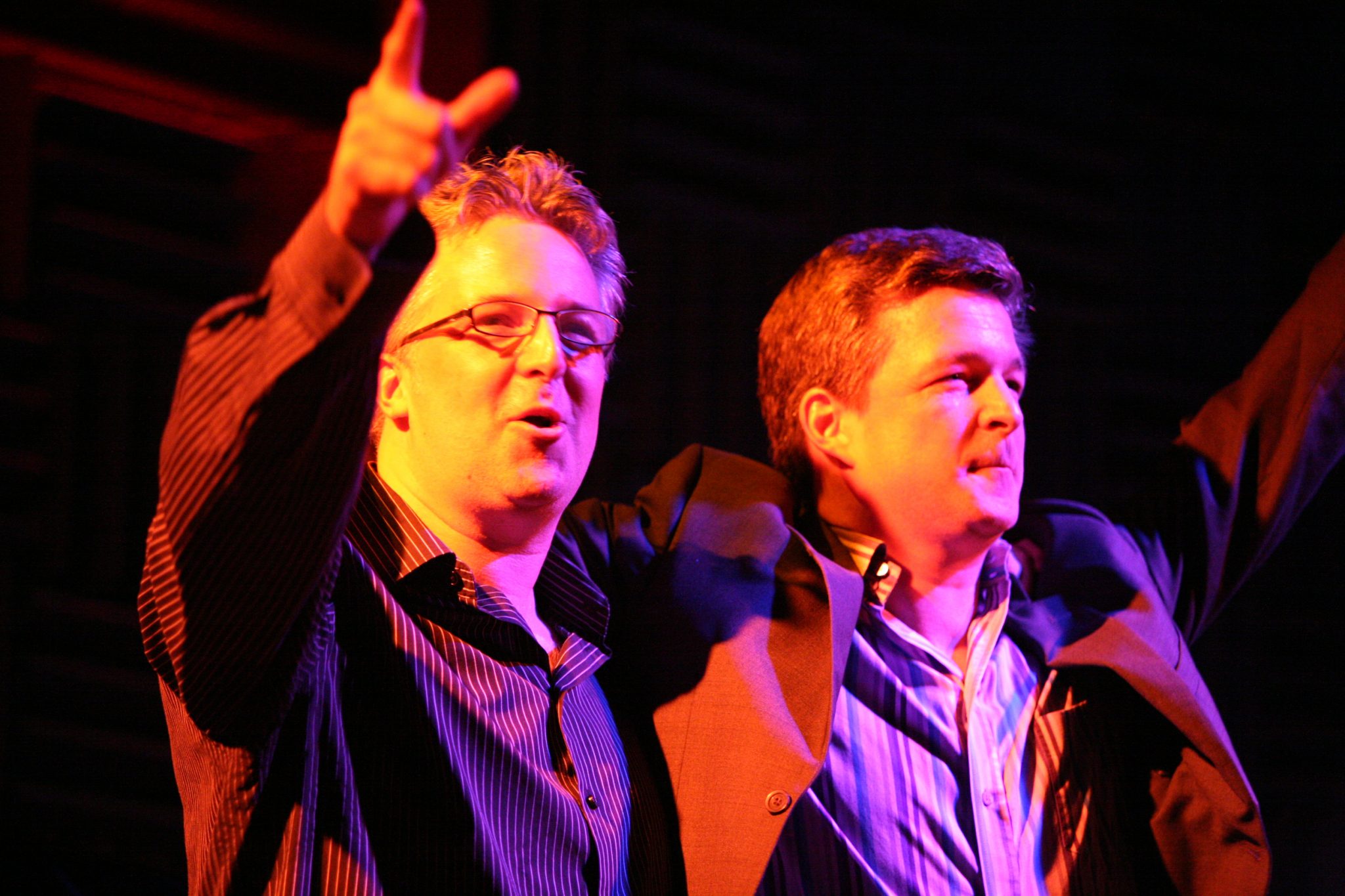 The Breithaupt Brothers are two-time finalists for the Fred Ebb Award for Musical Theatre Songwriting. Their musical, Seeing Stars, written with book writer Shelley McPherson, was first presented as a concert reading featuring Kelli O’Hara and Jesse Tyler Ferguson at Joe’s Pub at the Public Theater. From there, the show received a developmental workshop at the York Theatre in New York and a production – one of 12 jury-selected “Next Link” musicals – at the New York Musical Festival, where it played to sold-out houses. In addition, Seeing Stars, praised by The New Yorker for its “tuneful theatrical fare,” was a finalist for developmental workshops at NAMT and the O’Neill National Musical Theater Conference. In fall 2014, the Breithaupt Brothers’ second CD, Just Passing Through: The Breithaupt Brothers Songbook Vol. II, featuring 15 of Canada’s finest voices interpreting their material, was released to universal acclaim (“songs worthy of inclusion in the Great American Songbook,” according to CBC Radio).

Among the performers who have interpreted Breithaupt Brothers songs at the songwriters’ Birdland and Public Theater revues in New York in recent years are Kelli O’Hara, Norm Lewis, LaChanze, Jan Maxwell, Jesse Tyler Ferguson, James Naughton, Catherine Russell, Paul Shaffer, Janis Siegel, Brent Carver, and many more. In November 2019, as part of its 2019-20 season, Toronto’s Koerner Hall produced “Toronto Sings the Breithaupt Brothers Songbook,” a star-studded celebration of the Breithaupts’ songwriting. The Breithaupts’ songs have been featured on Showtime’s The L Word, and Don was honored with a 2009 Emmy Award for outstanding theme song for the television show, 6teen. Don and his band, Monkey House, are nominated for a 2020 Juno Award in the Vocal Jazz Album of the Year category for Friday. The Breithaupt Brothers are two-time winners of the USA Songwriting Competition and two-time winners in the 2015 International Songwriting Competition. The Canadian brothers live in Los Angeles (Don) and New York City (Jeff). They are members of the Dramatists Guild, and SOCAN and ASCAP, respectively.

"In the world of fraternal songwriting teams, America may have had the Gershwins - George and Ira - but Canada’s got the Breithaupts."

"The Breithaupt Brothers write high-quality songs in a wide range of styles."

"The Breithaupt Brothers have a gift for tuneful theatrical fare."

"The Breithaupt Brothers are an exemplary songwriting duo, as adept at crafting smart lyrics as they are at composing melodies that stay in your head forever and a day."

"There is a timelessness in Jeff and Don Breithaupt’s work, in their craft, wit, and feeling."

"I am way too young to remember the golden age of jazz and musical theater, but I imagine it must have sounded a lot like the music the Breithaupt Brothers write."

"The Breithaupt Brothers are writing for every generation, with a truly timeless sound. I am always honored to sing their songs."

"I am consistently delighted by the Breithaupt Brothers."