Corvette Crossing is the startling true-to-life story of five young men who become volunteers in the ‘Corvette Navy’– the third-rate flotilla of escort ships that accompanied the great WWII convoys during the crucial Battle of the Atlantic. The ships and the men, many of whom had never even seen the ocean, were given not a fighting chance against the lethal and ubiquitious German U-Boat fleet which dominated the path to Europe and had devastated Allied shipping, killing thousands.

Miraculously, through the pride of their comradeship and the chemistry of their diversity, the boys of Canada’s forgotten ‘Other’ Navy discovered a courage within themselves and challenged the submarine fleet at every turn, taking heavy losses. Corvette Crossing brings to life on the stage a vital, unsung chapter of world history. It’s a story about heroism and sacrifice that explores internal costs of war– how it draws the best and worst in our humanity– not just in theatres of battle, but in the brutal dynamics of men trapped aboard ship. Shattered but unbroken by the terrors of ocean war, they became the acknowledged heroes of the conflict who turned the tide of war, leading to the rescue of Britain, victory in Europe, and the preservation of freedom.

Corvette Crossing is no mere period play or history lesson. It’s a play that speaks to the human condition and our capacity for good and ill in the darkest times; where the moral compass spins wildly in the North Atlantic night.

“War is the province of uncertainty.” – Karl Von Clausewitz

Consider a world violently divided by race, religion and economic disparity. An axis of hate which ignites a campaign of terror, violating the most basic tenets of war and humanity. Destruction and mass murder waged by an unseen enemy who penetrates the heart of the North American continent, into consciousness itself. Consider that the true enemy lies within…ourselves. Clearly, this world picture of 1941 could as well describe the world in 2006. Uncertain times, then and now.This is a play about crossings. Physical, emotional, psychic– through the fog of adolescence and war, and the fight for a country also very much in its adolescence.  It’s about the blurred boundaries between vigilance and vengeance, and how the young men of the Corvette Navy were not only able to play a vital and largely-unsung role in preserving world freedom, but did so by tempering duty with mercy. Now, more than ever, their story must be remembered. This play is a crossing for me as well.  To receive the gift of this living history, to speak intimately with the men who lived it, to have the chance to articulate this legacy onstage for their generation and my own, is one of the most cherished moments of my theatre career. Corvette Crossing is dedicated, with intense gratitude, to the proud men who served, and the many who died.  We owe them nothing less than our lives. And that, at least, is certain.

All standing ovations are not the same. Sometimes it seems as if the audience is being unnecessarily generous or swayed by a few upright fans. That was not the case for the opening night of Eastern Front Theatre’s 'Corvette Crossing'-- the ovation was totally deserved... the set is simple, but the action is so effectively fleshed out by projections, sound and lighting that audience members gasped and jumped during battle scenes. 'Corvette Crossing' is a beautifully executed play and an important addition to the Canadian theatre canon.

Playwright Michael Melski...powerfully catches the fear and naiveté of the young men who fought and won the war in the Battle of the Atlantic. 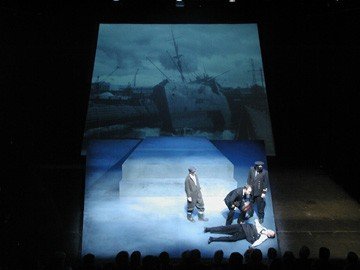 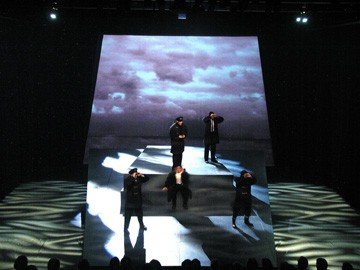 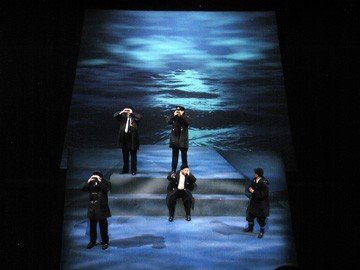