You’ve never met a pirate ’til you’ve met the likes of us,
We aren’t very likeable: we smell, we cheat, we cuss.
Our motto is so simple and plain for all to see.
“What’s yours is ours, what’s ours is ours,
“Til the end of eternity.

Ratt, Spatt and Knat are three red-nosed pirates whose lives are predictable on the blustering seas until Ku, a confident blue-nosed pirate, washes up on deck.  Despite being taken prisoner, Ku refuses to submit to the crew’s imperialistic mindset and attitudes of superiority.  Eventually, Ku is able to enlighten some of the pirates, if not all.   A swashbuckling, comedic tale about culture clashes and cultural assumptions, Bluenose provides a glimpse at small-scale imperialism as it unfolds on the Shark de Triomphe, a cluttered, foul-smelling ship.

“Bluenose is a lighthearted romp on the high seas with a powerful undercurrent…Playwright Emil Sher deftly weaves insolence with insight, coaxing laughs while encouraging thought.”

“Girls are gross. Boys are stinky. If there is a child in your life, chances are, you’ve heard remarks like these, as well as other put-downs about race, creed and body type. How do parents, teachers and other adults teach children to accept and embrace our many differences? Seattle Children’s Theatre has a tool to help. Bluenose, by Canadian playwright Emil Sher, explores such themes as acceptance, diversity and self-esteem, offering a platform for intergenerational discussion. But the play is hardly a moral treatise. Showing rather than telling, last weekend’s hour-long premiere took the audience on board a pirate ship. There they watched a play laden with humor and punctuated with polished singing and dancing, juggling and sword fighting. Time and time again the action was interrupted by giggles and guffaws.”

“Pirates! A great way to open Seattle Children’s Theatre’s new season – with a seafaring tale of the ocean, storms, and finding one’s own way to think about things… Adults can enjoy the wordplay… Another child-at-heart bonus is two full-on song-and-dance numbers enthusiastically performed in perfect harmony. … Our resident 6 year old was riveted throughout, laughing a lot. He thought that pirates were a good thing to have in a show, and decided afterward that, “Actually, it was the funniest show I ever saw!” The rest of the nearly full house seemed to agree.”

“My daughter came home repeating favorite lines and impersonating the actors… I appreciated the play’s approach to discrimination overall. The pirates are ignorant and bumbling but also likable and sympathetic, living examples of how good people can sometimes have small minds.”

“Ahoy, matey! Pirates have invaded the Seattle Children’s Theatre. But not the kind of pirates you have to protect your children from. These are the jolly, buffoonish and ultimately not very dangerous hoodlums of the sea in Bluenose, a lively… comedy for young ones. In reality, pirates are no joke. (There are some extremely nasty ones on the high seas today.) But in mythology and literature, from “Peter Pan” to “Pirates of the Caribbean” to this hour-long work by playwright Emil Sher, they often are colorful bumblers… The script’s wordplay and the energetic slapstick bits …are often entertaining – particularly for the show’s target audience of 6-to-10-year-olds.”

"Younger children will love the slapstick, pratfalls, and silly jokes. Older children will relate to the experience of not fitting in, like Ku’s blue-nose. There is humor, tenderness, and compassion. It would be a disservice to categorize Sher’s play as strictly a children’s play. Adults will find it to be a timely reminder of how their own prejudices play into everyday life.”

AGE RECOMMENDATION: Bluenose is suitable for children of all ages but a script tailored for students in younger grades (Grade 1 – 3) is available upon request.

Although the three red-nosed pirates can be played by any gender, the role of blue-nosed Ku is ideally performed by a female or someone who doesn’t identify as male. 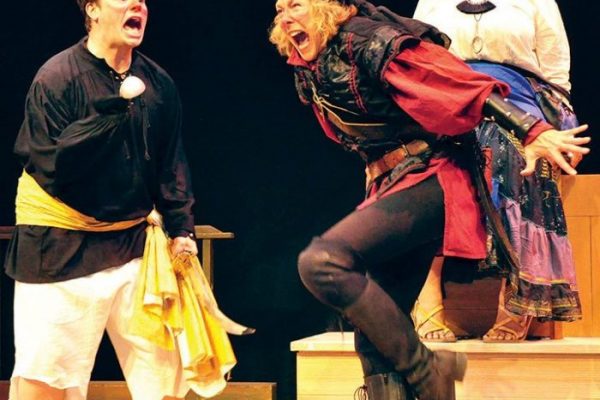 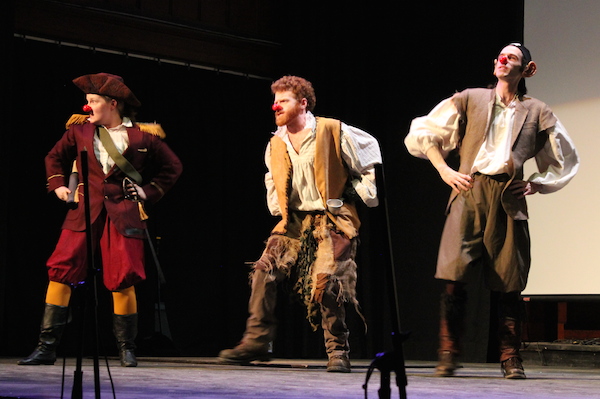 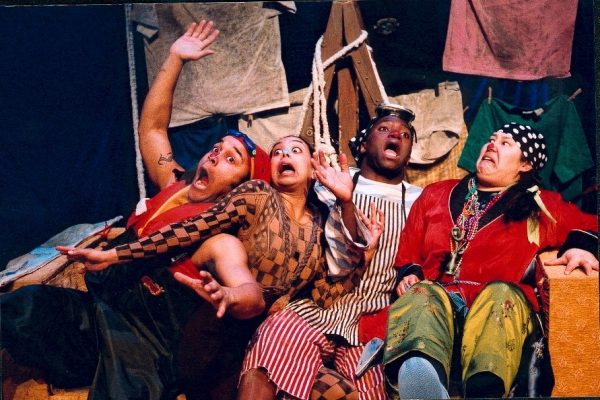 Bluenose is a play for school and family audiences that Emil wrote for Montreal’s Black Theatre Workshop and Geordie Productions. A lively romp featuring physical humour and music, Bluenose premiered in Montreal in February 2003.

Bluenose had its U.S. premiere at Seattle Children’s Theatre in 2008, and was remounted in Montreal by Black Theatre Workshop in 2017. It was staged by Colorado’s Thunder River Theatre in 2019 and will make its Toronto debut at Solar Stage in 2020.

Bluenose is published in Things That Go Bump, Vol. 2  by Signature Editions