Getting Over Getting Dumped.

bittergirl charts the break-ups of three women: one single and dating, one co-habiting, one married with a child.  This trio of Women Scorned experience heartbreak, hilarity, fairy-tales gone wrong, tequila, Mounties, love, honour, car-keying, repeated viewings of An Affair To Remember, fake spleenectomies and meetings of Breakups Anonymous.

And then there are the men!  The ones who want to alphabetize your CDs. The ones who give you shoelaces for your birthday.  See the bittergirls list all of those things you should have told him the truth about.  See Barbie and Ken Break up!  Laugh very hard.

...something of a cult...broke all attendance records and sold out its’ 8 week run. Now bittergirl is back by popular demand.

We say go for it. bittergirl rules...The hilarious music-charged piece....For lovers of Sex and the City, bittergirl’s take on dating and dumping is even more fun.

We’re not laughing at these silly women and men, we’re laughing at ourselves. And that can feel pretty good.

(Has that) extra zing....shoots like a hypodermic needle beneath the comic skin the show so cleverly wears.

Go see bittergirl...They’re having a blast dredging up their own - and others - painful experience of heartbreak. they’re getting the last laugh and sharing it with an audience.....these women are fabulous - what idiot would dump them?

A hyper-kinetic, interactive journey....At this show, bitterness is not only encouraged, it’s celebrated as a necessary rite of passage.

Since bittergirl was first produced in Toronto in November 2000 it has become a cult favourite across Canada and internationally.  The play had two sold out runs at the Tim Sims Playhouse (Second City, Toronto), and a long running production at the Pilot Tavern (Toronto).

It has been produced across the country at venues ranging from the Rotary Centre for the Arts (Kelowna BC) to the Rose Theatre (Brampton ON) and Theatre Aquarius (Hamilton ON), amongst others.

bittergirl was showcased in London England and New York City, at the Tristan Bates Theatre and John Houseman Theatres, respectively, and premiered in a full length production in London UK at the Kings Head, Islington.

Watch the Bittergirls interview on the 'Today Show' (NBC) 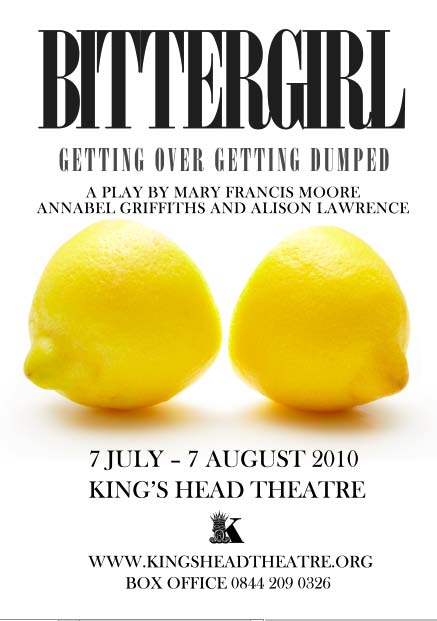 More Plays by The Bittergirls